As we returned to the fields in the Bale Mountains, Ethiopia, six months since our last visit in May of 2018, it was evident so much has changed. Our current visit coincided with the harvest season, and with that, the seemingly ever green lush forests of Manyate coffee village were now replaced with the vast golden barley farms in Besmena Udubulu, waiting to be harvested in just a couple of days.

But it was not just the noticeably drier weather and landscape features that have changed. It was also our project’s focus. Konjo Coffee has hit the road block in finding an end market for its coffee sales in the U.S. Its proposed goals of creating alternative livelihoods and promoting forest regeneration all hinged upon successfully securing sufficient coffee sales in the U.S and that was not happening. While the Konjo coffee project stalled behind its proposed timeline, other community-based conservation collaboratives were taking off in the Bale Mountains.

Among these is a new joint controlled hunting program, a collaborative conservation project spearheaded with international non-government organizations such as the Frankfurt Zoological Society and Farm Africa, as well as government units including the Ethiopian Wildlife Conservation Authority and the Oromia Forest and Wildlife enterprise. Trophy hunting has a long history in the Bale Mountains dating back to close to three decades where the Ethiopian government and private hunting concessionaries have been key players in the industry. The goal of the trophy hunting programs is to enhance the sustainable protection of the country’s important wildlife resources and their habitat, while ensuring benefits to the government and the involved community and private concessionaries. Despite its longer history and promising goals, community involvement in the trophy hunting industry in the Bale Mountains had remained minimal. It is only since 2015 that a new model of sharing revenues from hunting and sharing decision-making power with local communities has been implemented. To date, there are six controlled hunting areas under three safari hunters that are mainly set up for hunting of Ethiopia’s endemic and endangered Mountain Nyala as well as other species such as Menelik’s Bushbuck and Bohor Reedbuck.

The new trophy hunting program seeks to devolve natural resource management rights and share benefits from hunting revenues with organized local groups, also known as Community Based Organizations (CBO)s, which take collective responsibilities for sustainable management of the resource. By far, two of the six hunting areas have implemented the new model for jointly managing the resource as one management unit while the other four hunting areas have the revenue sharing mechanism without a joint monitoring and management system in place.

Our collaborating partners seek to scale up the new conservation model to the other hunting areas in the Bale Mountains, but are also facing challenges of presenting evidence on changing weather and how effectively the new model is working in attaining social and conservation outcomes. In our consultation meetings with the implementing government and non-government organizations, the big gap we identified was understanding community’s perception of their involvement in and benefits from the hunting programs thus far.

Our team’s role was to assess the implementation processes of the new conservation model, examining the perceived equitability of the program to different groups and how that is affecting the conservation attitudes and behavior of the participating community groups.

We selected two hunting areas with two different sub-models for our assessment. Between January 11th and 18th 2019, we conducted a total of 15 focus group discussions with different age and gender groups of the community as well as community leaders in Abasheba Demro and Besmena Udubulu hunting areas. 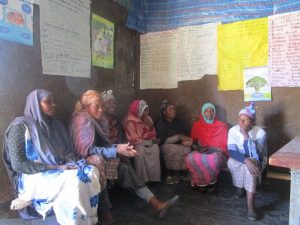 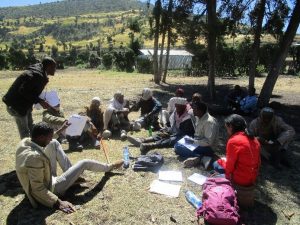 The focus group discussions shed important light on the factors behind the progresses made as well as the challenges encountered so far in implementing the programs across different communities. One focus group discussion participant noted; “We have heard rumors that hunting revenues have been received in our kebele’s account, but we [individual households] have not seen anything so far.” In a group discussion in another kebele, a participant noted; “Since the Walddaa [community-based organization] was set up in our kebele, many people are asking to be members, because they are starting to see the benefits themselves and that these are not just promises like before.” The community groups also forwarded important inputs towards improving the hunting programs. One of the participants discussed, “We also want to be organized like the others [kebeles that have community-based organizations], because we have more resources, but we don’t know why they [the Oromia Forest and Wildlife Enterprise] have not organized our kebeles. 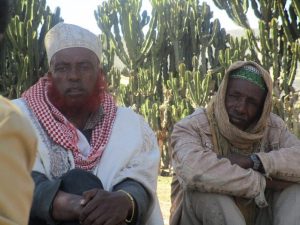 The field work experience was also a unique learning opportunity for our collaborators who were also our field guides: Muktar Kedir, a community engagement officer with the Oromia Forest and Wildlife Enterprise and Abudulkedir Ibrahim, project management officer from the Frankfurt Zoological Society. In Abdulkedir words, “We [Frankfurt Zoological Society] have done a lot of work of setting up the CBOs in the two hunting areas, but the gap is still there because… but we are limited in our capacity to scale up the program to other kebeles at the moment.”  Muktar also reflected, “We [the Oromia Forest and Wildlife Enterprise] have a lot of follow up work to do with these communities, and that takes time and resources; some of them don’t even know who we are.”

In our next travel back to the Bale Mountains in April, we plan to consolidate our findings and share our interim results with the implementing organizations that have expressed great interest in our work as an input to their program monitoring and evaluation efforts. Furthermore, we will use the in-depth qualitative data we have collected to inform and refine our survey design that seeks to include a more diverse representative sample from different groups of communities.

As we wound up our last focus group discussion in the Bale Mountains and drove back to the capital Addis Abeba, we once again made our way past the vast human dominated farmed landscapes of the villages and teeming wildlife outside the Bale Mountains National Park; powerful reminders of what is at stake in this region and what forms the center of our work…. the evidence of strong and increasingly sprawling human and wildlife presence beyond their traditional confines. 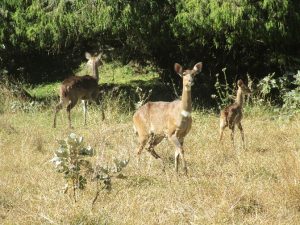