Our Experiences in Protected Areas of Mongolia By Ariuntsetseg Lkhagva, PhD with Oliver D’Orazio, Khishigbayar Jamiyansharav and Cynthia S. Brown

Our Experiences in Protected Areas of Mongolia

Protecting natural areas is one of the most widely used methods of conservation and is inherent in Mongolian culture. Mongolians are believed to have established the first protected area in the world, Bogd Mountain, about 250 years ago. Some historians suspect the tradition of establishing protected areas originated in the 13th century. During that time, many areas were preserved as holy sanctuaries in accordance with orders from Great Khans (Kings) such as Khubilai, grandson of Ghengis Khan. Since that time, hunting of any game animals during their reproductive periods has been officially forbidden. In the 16th and 17th century, Buddhism played a pivotal role in furthering the protection of nature and establishing Bogd Mountain in 1778.  In addition to mountains, rivers were also protected and given honorable titles, such as Khaan (king) and Tushee (leader or ruler). For example, the longest river in Mongolia was ordained Orkhon Tushee.

To date, 26.7 million hectares, 17.4% of Mongolia’s total territory, are under state protection. A recent mining boom, livestock number increases, desertification and climate change have brought more challenges to Mongolians who strive to conserve the natural beauty and function of their land. Many species that occur only in Mongolia, such as the Gobi bear, are listed as critically endangered by the International Union for Conservation of Nature (IUCN). Even so, substantial changes in conservation have not been made for many years, and protected areas remain the main tool for conservation. The Government of Mongolia updated the Law of Protected Areas in 1995 and adopted The National Program of Protected Areas. Currently, management and maintanence of protected areas are regulated by the Ministry of Nature and Tourism of Mongolia. Due to the remote locations and low budgets allotted to protected areas, they are difficult to  manage. However, it has been reported that the State will protect about 30% of the total area of Mongolia by 2020.

While conducting field work during the summer of 2018, our team had a chance to visit three protected areas in Mongolia: Khorgo-Terkhiin Tsagaan Nuur National Park, Khustai National Park and Bogd Mountain strictly protected area. Khorgo-Terkhiin Tsagaan Nuur National Park is in the center of the Khangai mountain range. Khorgo Mountain was protected in 1965, and in 1997 the surrounding area and Terkhiin tsagaan nuur (Terkh’s White Lake) were added to the protected area. Khorgo is a dormant volcano that erupted about 8,000 years ago. The biggest crater is surrounded by 22 small craters. Mongolians believe that this mountain is holy, and are scared to hunt here. The mountain is covered by larch forest and is a home for many rare species, such as red deer, siberian deer and wild boar. The Terkhiin tsagaan nuur is a pristine lake and a home for several fish species and breeding ground for many waterbirds. The lake is recognized  by the Ramsar Convention on Wetlands for its global importance as a waterfowl and wetland habitat

We arrived at the National Park in the evening. We were concerned about our car tires because of the bumpy “road” of basalt that formed during the ancient volcanic erruption. There were many other dirt roads, but they were all very bad and no better roads existed to get there. Eventually we arrived at the tourist camp, which is one of the many camps along the lake shore. Most of the camps consist of several  traditional, round shaped felt dwellings called “gers” or “yurts”. Each ger is furnished with 3-4 beds and a stove. Camps provide cups and hot water in a thermos. Also, traditional Mongolian food such as huushuur (the fried flat version of dumplings) and buuz (dumplings) can be ordered.

Our driver was born and grew up in this area. He said that most of the people living in the Soum center run ger camps are here during summer time, and the camps are their main source of income. During our visit, every camp was building a new restroom because they were requested by the Park administration to adopt “modern” standards. According to the new standards, waste from the restrooms must be removed by professionals. Also, we found out that 90 percent of the tourists visiting this camp are Mongolian.

The next morning, we walked along the lake shore and encountered a lot of plastic bottles, cigarrettes and plastic bags. Although prohibited by law, fish nets are commonly found among this trash. Our driver told us that unemployed people from the nearest Soum center fish the lake during the fall. This trash made us worry for the future of this beautiful area. Our driver told us that local people are taking some measures to clean up this area and improve the road conditions. On the way back we encountered these restoration efforts as locals filled big holes in the road with dirt. We hiked to the Khorgo crater and observed the surrounding area from the summit. We saw many Mongolians with their families hiking and greeted them on the trail.

After that, we visited  Khustai National Park. This National Park is unique compared to other protected areas in Mongolia. First, this area was protected because of the re-introduction of Przewalski’s wild horses, which are called takhi (spirit) in Mongolian.

Second, this protected area is managed by an NGO not by the Government. When we arrived at the gate of the park, a very different view welcomed us compared to Khorgo National Park. The tourist camp is located near the gate of the National Park. There is a board that lists prohibited and non-prohibited activities inside the Park. There are fewer non-prohibited activities than prohibited ones. The tourist center and camps are very well managed, and many foreign tourists were enjoying the area. We spent almost an hour in the tourist center. The center has displayed many animal and plant specimens and the results of the biological and ecological research carried out in the Park. As the Park manager said, ecological and biological research are a primary activity in the Park. We also had a chance to meet

a research team that was conducting carrying capacity estimation of the horses in the Park. Przewalski’s horses were grazing peacefully when we came to the designated point to see them. We did not see any herder families inside the Park. The Park boundary was distinguishable by vegetation cover: inside the park had much higher cover than outside. Rangers of the park were busy building a big gate at the Park entrance, which is required by the Ministry. 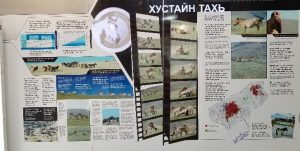 We visited three vegetation monitoring sites in Khustai. The Park researcher who introduced the monitoring sites told us that they have big datasets of vegetation, soil and weather collected over the last 20 years, and they need a good statistician to analyze them. Seeing this kind of research activity is very encouraging.

Two days later, we visited Bogd Mountain strictly protected area, which is the oldest and closest national park to Ulaanbaatar, the capital city of Mongolia. This Park is located on the south side of Ulaanbaatar. Since this Park is strictly protected, all human activities are prohibited. A dense collection of private houses is located close to the park, which does not have a tourist center and camp.

Some of our Mongolian partners said that in recent years, rich people have built houses here in order to flee the severe air and soil pollution of Ulaanbaatar. The houses are not connected to central sanitation and heating lines, and they are creatingg a new area of air and soil pollution. Wrestlers built two large gers and were doing a training (preparing for Naadam wrestling) inside the Bogd Mountain protected area. This is allowed because one of the current parliament members is a famous wrestling champion and has been granted access. Herder families, who herd parliament members’ large herds of livestock, also settle inside the area. Cars and motorcycles were running everywhere in the park, despite it being surrounded by an iron mesh fence with locked gates.

For us, these three protected areas were very distinct from each other. Khorgo-Terkhiin Tsagaan Nuur National Park is negatively influenced by local people’s activities, while the wealthy class has a larger impact on Bogd Mountain. The borders of Khustai National Park are enforced better than the other two parks, and the quality of the resources inside the park is better as a result. But outside pressures from herders in search of forage for their livestock is increasing, and maintaining the integrity of park borders is a constant challenge. The protected areas of Mongolia would benefit from more effective enforcement of laws and policies designed to protect the valuable natural resources and ecosystem functions they provide, which would in turn help the Ministry achieve its conservation goals.